Our daughter, Mac, stepped into the Jr. Handling ring for the first time on her 4th birthday with our Veteran Golden Retriever, Arrow. Mac would show once in a while in the Junior competitions, but that didn’t seem to be enough. At 10 years old she decided she wanted to play with the big dogs in the conformation ring. She admired a Newfoundland necklace I had and thought she too should have one…at the time, I felt it was a too expensive piece of jewelery for a child to own, so we made a deal…when she obtained her first Canadian Champion on a Newfoundland shown solely by herself, I would purchase one of these gold pendants for her. She made me eat my words!

We gave her our newest up and coming female puppy to show for the first time named Whisper. In one weekend she started and finished her Canadian Championship, winning Best Puppy In Show along the way under Walter Pinsker! Mac continued to show Whisper (with a new gold Newfoundland necklace) to become a multi Best Puppy In Show winner. Mac still dabbles in Jr. Handling and has won Best Jr. Handler Overall several times now, as well, Reserve Best Overall Jr. Handler at the Finals from the Jr. Novice class, being the youngest class! Mac has shown and won awards in USA and Canada, at Nationals and Specialties, mainly for Newfoundlands, Bernese Mountain Dogs and Golden Retrievers, however, she would assist someone else any chance she got!

2014 UPDATE:  MacKenzie has been focusing on her academics and horses, taking up barrel racing and now riding English at her new school – Queen Margarets, on Vancouver Island.  Mac did attend a show in November with a male she co-bred, from Whisper’s last litter…Mr. Chaos – Mostabear’s Impending Mayhem, and was awarded BEST BRED BY EXHIBITOR IN THE WORKING GROUP.  We are hoping to have her attend a few more shows in between her studies.

2016 UPDATE: MacKenzie has now graduated and is attending University, so dog shows are few and far between.  Her younger brother, Karson, now jumps in the ring from time to time. 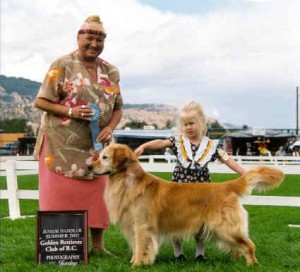