Olive was only 5 years old when she left us unexpectedly.  She was pregnant with a belly full and as her last due date approached, it was evident she was growing weaker, having a hard time walking around.  I’d never seen a pregnancy grow to be so large!  Even if she had started to whelp naturally, there was no way she would have had the strength or energy to make it through delivering 11 large pups.  We scheduled a C-section on Friday, October 29, 2010.  As this was my first C-section with a newf I was a little nervous but felt this was the right thing to do for Olive.  It was an exciting day on many levels because Olive was a granddaughter to my first newf, Wilbur, who will forever have a very special place in my heart…along with his offspring.  It was also my birthday, so to have her litter arrive on her last due date which happen to fall on my birthday was pretty great!

The surgery seemed to go well with all ELEVEN pups strong and healthy.  Olive didn’t seem to recover as fast as I thought she would from the anesthetic but she was also spayed at the same time, so we felt she was doing OK considering what she’d just gone through.  We went home around dinner time but as she was lifted out of the vehicle I noticed blood all over the bumper.  I rolled Olive onto her back and noticed she appeared to be oozing blood from her incision.  A call to my vet had us return to the clinic to see if she had popped some stitches.  It was dripping pretty good when we were at home but when we returned to the clinic ½ hr later it seemed to subside…figures.  We drew blood and her count was on the low side, again felt it to be expected given what she’d just been through.  Back home we went…babies in tow.

Over the weekend Olive seemed depressed and although she was still weeping from her incision, she wasn’t oozing like before.  Monday had us checking back in with our vet to provide an updated status report, and we were starting to think perhaps she had an infection.  My vet was not happy with the results of a new blood test and we now feared she may be bleeding internally!  Back to the clinic we went to reopen Olive to see what was going on.  She did have a nasty infection brewing inside so she was flushed out with a ton of saline and closed up again.  This time she seemed to wake up a lot faster so we felt this must have been it…we’re on the road to recovery!  At home that evening the babies fed well and we thought we could breathe a sigh of relief, that perhaps we were back on track…or so we thought.  We lost Olive through the night…it was devastating!  Obviously the loss was a huge shock but once we could collect ourselves, we now realized we have a new problem – 11 orphaned pups that were just 5 days old!  Thankfully they received those first few precious feedings from Olive to provide them with antibodies, but unfortunately, her infection also passed through the milk and we had our hands full trying to save them.

We immediately brought another female inside.  Sheff was the last to have pups and has always been our best mother…it was an obvious choice who to ask to be the surrogate mother to Olive’s litter.  Sheff was a little apprehensive at first, wanting desperately to care for the now crying hungry babies, but at the same time, worried about where Olive was.  With some coaxing she hopped inside the whelping box and immediately laid down to snuggle the pups.  Although Sheff was completely dried up, she allowed them to nurse – I think providing comfort for both her and the pups!

We had puppy formula in the freezer for emergencies and immediately mixed up a batch.  We found some old baby bottles of Karsons and began to teach the pups to drink from a bottle.  It was a bit of a trial and error process finding the right nipple that they would drink from but we eventually found what worked, changing them up as they grew older.  Round the clock, every three hours was getting more and more difficult as the days went by.  It took approx. 2hrs to feed all the pups.  We felt like walking zombies during the day.  Thankfully we had friends come and assist when their schedules would allow.  We did end up losing 2 males, and at times we thought more were fading but we managed to save the remaining 9.  We would bottle feed and clean each pup, then put them on Sheff to suckle for comfort.  At one point we felt we were losing the battle so after a frantic search online about rearing orphaned pups, I stumbled across an amazing website (http://www.leerburg.com/bottlefeeding.htm) that I truly feel saved these pups lives!

2. 3 oz. sterilized water (baby water OR boiled water that is then cooled). This is NOT needed if using whole goat’s milk.

4. 1 cup of whole yogurt (avoid skim or fat free if at all possible).

****If you cannot find Karo or Corn syrup where you live, you can do a Google search for “substitute for Karo syrup” and get some options.****

When I Googled “substitute for Karo syrup” here is what I came up with- 1 c Karo can be subbed with 1 c white sugar and 1/4 c hot water (cook it to dissolve in the water best you can get it to. Depending on the recipe, if you need the sugar to be completely dissolved you might need to add a bit more water).

Place ingredients in a blender and blend or use a wire whisk. Be careful to not over blend and create a milk shake full of bubbles and then tube bubbles into the puppy.

Warm formula to body temperature (dogs are around 101 degrees). Discard any un-used formula. This is a thick mixture – use a stomach tube to tube feed or enlarge the hole in the nipple for easy access for the pup.

I immediately took them off the commercial puppy formula and fed this goat milk formula.  I saw results within 12-24hrs!  I saw weak pups, gaining strength by the second feeding like you would have never known they were on the brink of despair.  We let them eat until they fell asleep/off the bottle.  They were plump babies, but content.  We had read that when you hand rear a litter they can sometimes be delayed in development; perhaps, when solely fed commercial formula, as we did not experience this.  At no time did we see any developmental setbacks.  In fact, this litter had some of the biggest pups we’d ever had.  They were obviously well socialized with people and other dogs too.

They stayed on the bottle for 5 weeks.  For the next week we introduced the formula to the puppy pan to teach them to lap up liquid, then added some food, soaked in formula rather than water…all the while topping each pup off with a bottle.  By the end of that week they were off the bottle and now eating on their own, lapping up formula and drinking water.  We had many touch and go scenario’s along the way but I honestly feel that formula saved them.  Never again will I use a commercial formula.

Because Olive was primarily Mac’s dog, she chose an “Angels and Miracles” theme for that litter. Two of Olive’s parting gifts:

Mostabear’s Angels and Demons…called FAITH…because with breeding there is good and bad…and you just have to keep the Faith that everything happens for a reason!

This litter obviously will hold a special place with everyone that has assisted us to ensure the remaining 9 pups would survive.  Thank you for Chris Chart, DVM and staff at Selkirk Vet Clinic who were there for us every step of the way.  If anyone reading this is unfortunately having to hand rear a litter – please do not hesitate to contact me for more detailed information and assistance.  Although this litter was one of the hardest on my heart, I believe it was also the most rewarding, as exhausting as it was.

Can Ch Mostabear’s Round of Martini’s 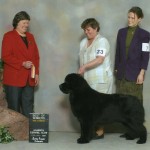 Can Ch Mostabear’s Round Of Martini’s