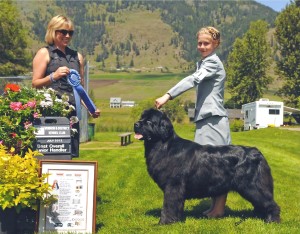 Clearances Link (not yet active)

2010 – Debut made at the Canadian National weekend – placing in her classes and coming home with a BEST PUPPY IN SPECIALTY Show at 6 months!

– Second weekend out she was awarded BEST PUPPY IN GROUP and assisted Mac with a BEST OVERALL JR. HANDLER win

2013 – Tug obtained all clearances, is playing in the water and attempting carting.  She is also hoping to have her first litter early October.